Hello! This is a card that ended up being as different from the original plan as it possibly could have been. It started out as a Print & Cut project for my Silhouette Cameo. I was looking at templates in Microsoft Publisher and came across a birthday poster template called Milestone Birthday Poster. Here is a picture of it.

I ended up not making a card with that design but I had already played around with making several layers out of it so the card would have some dimension. I thought the swirly edge would be great for a whimsical card. I immediately thought of the Fairy Happy stamps and dies. They are adorable! I used Marina Mist cardstock from Stampin’ Up! for my card base and the same color ink for the “BIRTHDAY” part of the sentiment inside.

Using the Print & Cut feature with my Cameo, I cut out the rectangle with the swirly edge and also cut out the wonky rectangle shape that is right inside it. I printed the dashed design with the Cameo before cutting it out using a Gelly Roll Metallic blue pen and an adapter from Chomas Creations. I could have purchased the Silhouette pen holder but this one seems sturdier and more versatile and was highly recommended by Kristen Magee. She has some awesome how-to videos for the Silhouette Cameo on her YouTube channel Kristen // k.becca. I am currently obsessed with the Gelly Roll Metallic pens because they produce a gorgeous metallic shine. Unfortunately, I couldn’t capture it on video :(. I got my set at Michael’s.

I stamped all the images with Memento Tuxedo Black Ink and used Prismacolor pencils and Gamsol (I got mine at Michael’s) to color all the images. I’m sorry that I can’t report which colors I used because I packed them up for travel without writing down the ones I had used. Though you cannot see it in the pictures, I used a fair amount of Nuvo Aqua Shimmer Glitter Gloss on the wings, flowers and slippers. I added the dots to the little toadstools with a White Uni-ball Impact Pen.

For the inside of the card I used the Loads of Happy stamp set from Avery Elle and the third fairy that I didn’t use on the front of the card.

I think this card turned out super cute. I can’t wait to give it to one of the girls in my neighborhood.

Thanks for stopping by!

(Compensated affiliate links used when possible at no extra cost to you!) 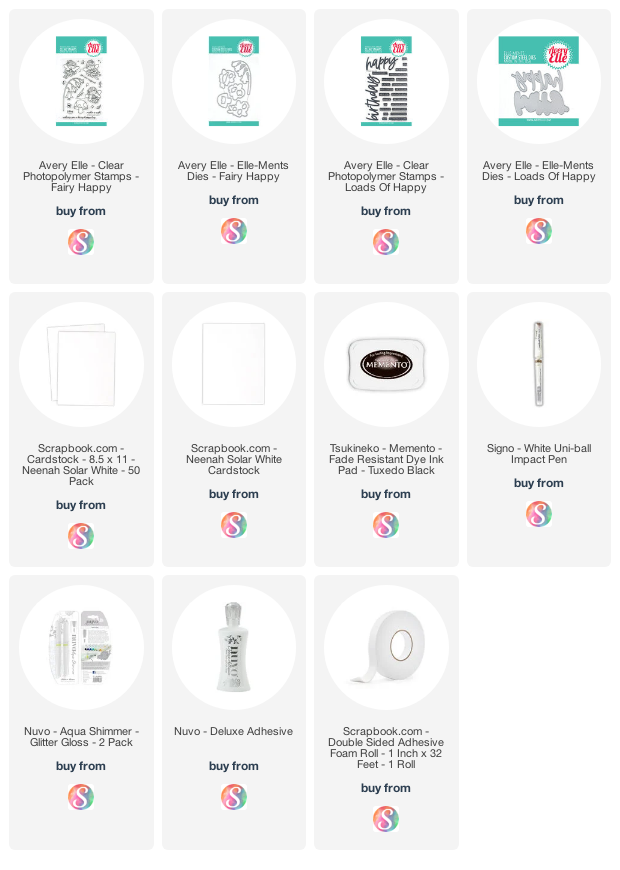 EASY Tags with the Tin of Cards Stamp Set