Hello! Do you have an electronic die-cutting machine? The more I learn about my Silhouette Cameo, the more I like it. A while back I watched several YouTube videos at Kristen // k.becca and I wanted to give glitter pens a try. Silhouette carries its own line of pens but, although they work great, I wanted to try glitter and metallic pens from other brands. There are a couple of adapters that allow you to use any pen you like. I bought the Chomas Pen Holder and a set of Gelly Roll Metallic Pens that I picked up at Michaels. The Silhouette pen adapter set has adapters for several pen and marker sizes.

I used my Silhouette Cameo to cut all the elements for this card using a cut file called Butterfly Gate Fold Card (link below). The two detailed butterfly diecuts are filled in (colored) with a metallic pen using the Cameo with the Chomas pen holder. I adhered them to the card base with Nuvo Deluxe Adhesive and filled in the spaces in the wings with a Sakura Gelly Roll Stardust Pen. The pen left lines of shimmer and I thought about switching to an Aqua Shimmer Pen to get more even shimmer but decided I liked the additional texture from the Stardust Pen. I did not use the solid butterfly. I originally planned to cut it out of vellum but changed my mind.

I created the “hello” using a font called “Blue Rose” and cut it out of gold glitter paper from Concord & 9th’s Neutrals Glitter Paper Pack. The “DEAR FRIEND” is Eras Light ITC, written with the Cameo and the same metallic pen used to fill in the butterfly. As you can see, you can get great detail and it doesn’t look as flat as a printed sentiment. I am a cheapskate when it comes to fonts so I typically use fonts that came with my computer or free fonts that I find online. I did recently purchase a couple of thin fonts to use with pens in my Cameo.

I left the inside of the card blank so that I could use it for one of the many occasions I might need it for.

I made things a little harder for myself with the belly band by diecutting it with a split in the front, in the middle of the “hello”. It would have been a lot easier to just cut a strip of cardstock, wrap it around and glue it together, and attach the diecuts in the center.

I hope you like the card. You could create it with a large butterfly die if you don’t have an electronic die cutting machine. Thanks for stopping by today!

(Compensated affiliate links used when possible at no extra cost to you!) 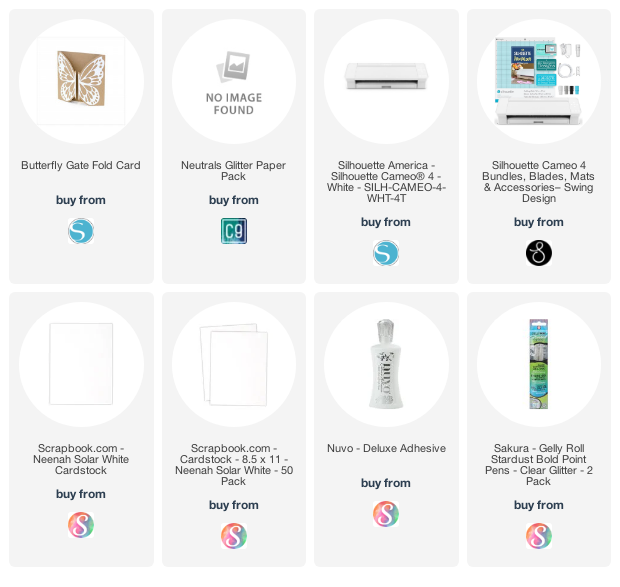